WHAT IS TORQUE? WHY DOES IT MATTER?

Torque is a cost-effective and widely accepted estimate of clamping force. In assembling a build, the torque application specifications are added to ensure the threaded fasteners remain in place and do not vibrate loose.

The concept of torque has been around since Archimedes. You may remember Archimedes from your school days and his quote, "Give me a lever, and I will move the world."

Torque is an application of a lever. In this case, the lever is used to provide a rotational force on a threaded fastener. While the concept is simple, the nuances are more complicated.

Given that up to 90% of torque can be used to overcome friction that means that only 10% of torque accounts for clamping force.

Wrench design is a significant factor in impacting torque application. In physics, a tube bends more readily than a flat beam. In 1924, when Walter P. Chrysler invented the commercial torque wrench, it was a flat beam of steel. While the type of wrenches that are on the market have changed, the physics principle still applies. 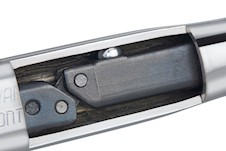 The flattened case provides support for the clicking mechanism. It, too, is flat and is guided by lubricated steel ball bearings. This makes the wrench highly repeatable. Those ball bearings also have a very strong impact on durability. Because of the guided movements, there is less wear and tear on the moving pieces. That enhances durability.

Flex Head Design is Not a Solid Torque Strategy

Some companies manufacture their torque wrenches with a "flex-head." The flex-head pivots. While that might make it a little easier to get the socket on the nut, there is a significant drawback. The flex-head makes it extremely easy to deviate away from 90-degree torque application, or easier to sideload the wrench. Now you have just added another variable to the torque equation. Now the operator must vary from their normal routine in how they apply torque. The operator must be certain to keep the wrench at 90 degrees to the fastener.

Hard to believe that in this day and age and level of technology that interchangeable heads can impact torque output, but they can and do. Specifically, the cut and held heads are often guilty of this. Why? Because they cut the heads off a wrench and weld that head on to a plug, or a stay, and that goes on the end of a wrench. Some companies give you an alphabet of choices; The problem is that larger heads used on larger fasteners require a bigger plug on which to weld the head.

Why not just by the wrench where all of the heads fit on all of the wrenches? That would be Sturtevant Richmont.

Why Does All This Matter?

Torque is a relatively inexpensive way to estimate clamping force. Clamping force holds things together. Not enough clamping force and nuts and screws can come loose as a result of vibrations. That is also what causes a lot of hydraulic leaks.

See the Case of the Curious Lab Manager for a real-life story on how torque screwdrivers made a difference.